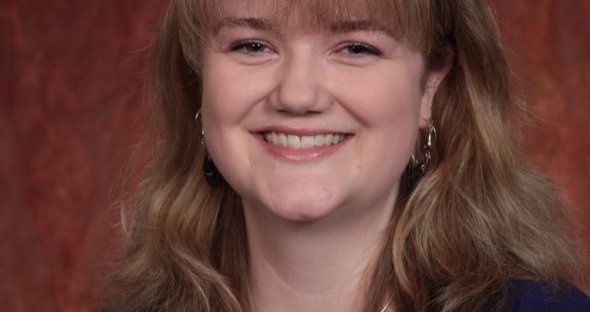 If you’re anything like me, you rarely walk by the Fine Arts building. Nestled in the northeast corner of campus, it’s home to FSU’s Museum of Fine Arts, the Richard G. Fallon theater, and Dr. Elizabeth Osborne’s office. Walking into her office, you’re immediately greeted by the sound of trickling water from a small fountain behind Dr. Osborne’s desk. The homey feel of her office is matched by her bubbly, welcoming personality. As we sat down to talk about her journey to professorship, her face lit up as she recalled her first experience with the theater.

“I was in junior high. My parents took me to see a production of Andrew Lloyd Webber’s Cats. I was so excited when the cats came out at intermission. I was sitting in one of the aisle seats and one of the cats started playing with my shoelaces. I was just so entranced by this actor that was actually touching my shoe and playing with my shoelace—connecting with me, personally—that I knew that theater was something that I just had to be a part of.”

And how does she combine this love of theater with history for her research?

“Well, I love history and I’m always excited to think about how our past continues to influence us today. August Wilson is a playwright of African American theater and one of the themes in his work is that you have to know your past to move into the future. That’s one of the ways that I think about history—that you have to understand who you are and where you come from to understand where you’re going. For me, that’s why history—and theatre history—is so important. It tells us on a very visceral level who we are and where we’re going, as individuals and as a society.

My current research explores this. It’s about how performances of history shift over time and, I argue, can predict social crises. When I started to think about performances of history I was struck by the way they tell us much more about the society that was performing that history than the history itself. The history that is performed often has very little connection to what historians might view as historically accurate—something that historians generally agree on, after sorting through verifiable facts, research or archival data. Nevertheless, these performed histories become an enormous part of cultural history. They are the things that people remember when they think about who are we as people, often far more than the lessons they learn in classrooms or read in textbooks. So this project is about exploring the different roles these performances of history play in forming, supporting, subverting, or manipulating cultural memory and cultural amnesia for us as a people.”

Instantly, my mind went to Hamilton. The hip-hop musical written by Lin-Manuel Miranda about the life of American Founding Father Alexander Hamilton was inspired by the 2004 biography Alexander Hamilton by historian Ron Chernow. It’s been a national phenomenon, with astounding success on and Off-Broadway.

“Hamilton is an amazing show—a phenomenon! I was lucky enough to see it on Broadway and it’s absolutely thrilling in performance. Lin-Manuel Miranda describes Hamilton as “America then told by America now.” It’s famous for its cross-racial casting, rap and hip-hop score, and focus on Alexander Hamilton as a poor immigrant who works his way up to one of the highest and most respected offices in the country through hard work and smarts. It’s the American Dream, only it’s made possible for anyone.

But the show is also tricky in what it shows, and the history it shows isn’t entirely accurate in some ways that are pretty important. For example, while Hamilton is doing a lot of important work in terms of bringing people of color to the stage in major roles, historically they weren’t “in the room where it happened” as founding fathers. People of color were all over the colonies during the Revolutionary Era, but they weren’t given access to the spaces where the Declaration of Independence was written or positions of power that would enable them to play these roles, and this is history that the nation needs to reckon with rather than forget. It makes me wonder if simply casting people of color as founding fathers is enough. Why not create a show about the lives of people of color during the Revolutionary Era?

Another example is Hercules Mulligan, who is credited as a vital spy for the Patriots in Hamilton. Historically, Hercules Mulligan was a white man who owned the black slave, Cato. Cato was the spy, but the show erases the existence of the historical figure—a black slave—and gives credit for his labor to his white owner, who is then portrayed by a person of color in the production. So Hamilton raises questions about how we interpret and perform our treasured historical narratives and what that says about our society. Of course, Hamilton is about the nation’s mythology. It’s about something that people can grab onto because it’s a story that is embedded in our national identity. Would a show about a lesser-known story have become a phenomenon like this? Performances of history can bring those less-well-known histories into public consciousness, but probably not to the same degree as Hamilton! So there’s different work to be done on both of those.”

We stuck with Hamilton as we talked about the real-world examples of her work. I was particularly curious if the incident with Mike Pence in November of 2016 was an example of how historical performances can show us more about our nation now than the actual history being performed.

“I think that the way that the Hamilton cast interacted with Mike Pence in that historical moment was really important. He had just been elected Vice-President so he hadn’t taken office yet. Lin-Manuel Miranda wrote the vast majority of that speech in conjunction with the cast members. They focused on vital issues of representation that connected to both the show’s themes and to the contemporary political and social moment in a clear, respectful, and heartfelt way. This combination is the great power that theatre brings to performances of history.”

And as for her journey to FSU?

“I am from the Midwest, and I came to Tallahassee for FSU. I was excited to be a part of a school that had an active production season and a graduate program—we have M.A. and Ph.D. programs here—and I thought that I could do well with an introduction to theater for non-majors class. FSU just seemed like a good fit.”

That introduction to theater for non-majors class she’s talking about now caters to 800 students a year, and Dr. Osborne’s hard work in taking the class online is mostly to thank for that.

“I started my graduate degrees with an MFA in Dramaturgy, which is the literary side of theater practice. Dramaturgs engage in theater outreach, season planning, and figuring out how to help audience members connect with the shows that they see. Since one of the things that I love to do is help “non-theater” people connect with theater, teaching the theater for non-majors course was a natural fit. I’ve been teaching that course now for twelve years and have taught more than 10,000 students.

The class has had three iterations while I’ve been here. When I first came to FSU it was fully in person, and that was really interesting. I taught three classes, each in sections of 180 students. I would lecture to them eight times a week and I had close to 600 students a semester.

The second iteration was the hybrid version, which was my favorite version. It was partially online with recorded lectures and partially in person, in small sections. The students would do performance projects, playwriting, design work, and all kinds of theater practice, and discuss plays in detail. That was my favorite because students could get actively involved in the class and it was a more collaborative and trust-based environment that left more room for risk-taking. Now we’re in the online version which is a totally different animal again. I’m in the process now of revising the course for the online version 2.0 now, which will be bringing more of the theatre practice and collaborative work back into the course again.”

And Dr. Osborne’s favorite part of being faculty here at FSU?

“My favorite class has been my contemporary theater class. It’s one where I assign new plays and we talk about trends in theatre as they’re happening now. It really pushes me and the students to see all of the exciting stuff that is going on around us. I always assign a project called the Treasure Hunt in that class. Students have to find a contemporary theatre “treasure” that I don’t know about, get their topics approved, and then set out on research that is often ground-breaking and requires them to call theatres, interview artists working in the theatre now, and even lay the groundwork for jobs they get after graduation. It is surprising and wonderfully humbling to find out how much I don’t know. This assignment is a great reminder and I always learn so much from all that my amazing students find.”

View all posts by fsufacultydevelopment